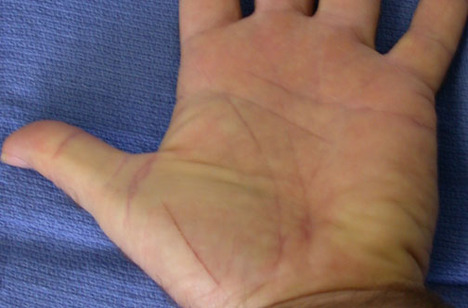 Sharp Trauma is caused by a force being exerted on the body in a more concentrated manner, like the force exerted by the tip of a nail penetrating your skin or the edge of a knife slicing though flesh.

﻿Lacerations﻿ are wounds caused by blunt trauma and are usually identified by their rough edges. Lacerations are typically deeper than abrasions, but not a clean as incisions. 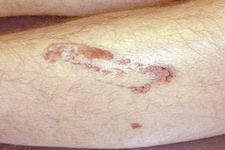 Abrasions are blunt trauma wounds that are caused by the skin being dragged against a surface -- typically rough -- and being damaged. Abrasions can be as simple as friction burns or as horrific as you flying off of your motorcycle and sliding face first along the asphalt, tearing off your face in the process.

Burns: The side effects of playing with fire

Like trauma wounds, forensic pathologists can use certain characteristics to determine the severity of runs.

Identifying VICTIMS and suspects through DNA and Fingerprints

Fingerprint Identification
Fingerprint ID is made possible by the minute ridge formations and patterns that are unique to each person's fingerprints. Oil that collects on the skin is transfers these unique patterns, which a finger comes in contact with a surface. There are eight types of fingerprints: plain arch, tented arch, ulnar loop, radial loop, plain whorl, central pocket loop, double loop whorl, and accidental whorl. However, it is the fingerprint minutiae that provide the defining characteristics of each person's fingerprints. In the United States, fingerprints are processed through the Integrated Automated Fingerprint Identification System, which is maintained by the Federal Bureau of Investigation. An agency can submit the fingerprint electronically or by mail to have it processed. 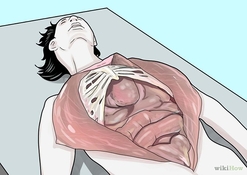 There are many autopsy methods that are used. A brief overview of the most common ones are listed below. Out of these, the most popular one is the Virchow method. (Check out the Timeline for more details about when and how Virchow developed is autopsy method!)


R. Virchow Technique
Organs are removed one by one from the body to be examined. This is done in the following order: expose the cranial cavity, the spinal cord, followed by the thoracic, cervical, and abdominal organs.

C. Rokitansky Technique
This method is characterized by in situ dissection. The dissection begins at the neck and slowly works its way down the body and the organ is removed as a bloc. A cut is first made at the larynx to separate the esophagus from the pharynx. Larynx and teachea are pulled downward, and using a scalpel, the chest organs are cut. The diaphragm is cut to expose the abdominal organs. Other organs like the bladder and rectum are separated from the body by using a scalpel to cut the pelvic ligaments.

A. Ghon Technique
Like the Rokitansky method, the Ghon method also employs the bloc method of removing thoracic, cervical, abdominal organs. However, the organs are removed "en bloc," rather than with in situ dissection.

M. Letulle Method
Thoracic, cervical, abdominal, and pelvic organs are removed "en masse," meaning as one big organ block. While, his organ mass is awkward to handle, it allows the body to be made available for examination in less than 30 minutes because the process of removing organs is much quicker.